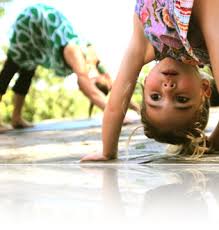 Kitsilano has long been Vancouver’s yoga hub, so it is no surprise that Yoga Buttons chose our neighbourhood to open the first Vancouver kids’ yoga studio, with classes starting this September. The studio is located in the former Vita Salon space at 2525 West Broadway.

Yoga’s benefits of flexibility, strength and relaxation transcend all ages. Yoga at an early age is said to encourage self-esteem and body awareness as well as foster cooperation and compassion. I am always a bit skeptical of a tot class but, if nothing else, kids yoga offers an opportunity for physical activity in a non-competitive environment, which I am all for.

Watch for classes to get underway in September 2012.

Like
Previous Story:
What to do this weekend in Kits: July 13-15
Next Story:
Meet the Vanier Park bald eagle family